“A world in which every human being’s life is equally valued irrespective of caste, gender or economic status”

Set up 100 DigiSwasthya centres in PAN India across all aspirant districts in India impacting more than 1 crore people and make Digiswasthya people’s most trusted healthcare partner where they will get the right direction, information, and diagnosis for their issues.

We provide correct information about their diagnosis, and the existing schemes of GOI, and the organizations that help with patients’ treatment- Cancer, Kidney transplant, Bone Marrow Transplant, Blood Cancer, and any critical surgeries or treatment.

We generate EMR for each patient to keep track of their health. We provide access to every patient to check their reports and the prescriptions online. This saves a significant amount of time when patient moves to another hospital for treatment.

For patients with critical, advanced, or rare diseases, we facilitate teleconsultations with specialists from hospitals in tier 1 cities like Mumbai, Bangalore, and Delhi.

We provide a one-stop-shop for our patients where they can get access to timely and accurate diagnoses. If posed with critical issues, we refer to an expert hospital so they can save time & get the right treatment.

We provide referral pathways to distinguished treatment centres and hospitals. This helps the patients receive the care that they need right at the initial stages of disease progression.

Our team performs regular follow-ups with our patients and hand-holds them through every step. This gives us a better understanding of their health outcomes and completes the feedback loop. 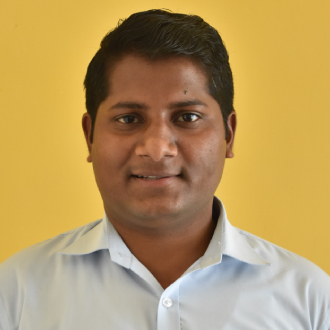 In 2007, Sandeep was unwell. He wandered from one hospital to another but did not get the right diagnosis due to lack of qualified doctors and under-equipped hospitals in Sant-Kabir-Nagar, a small district in Uttar Pradesh. Lack of access to guidance of what needed to be done added to the worries.

After 6-months, he got a biopsy done and was diagnosed with Ewing-Sarcoma (a type of bone-cancer). His whole right-humerus-bone was replaced. Doctors later proclaimed that Sandeep would have become immobilized if diagnosis would have been delayed.

Over the next few months, he recovered slowly at Tata Memorial Hospital, Mumbai. However, the journey from being completely clueless as to what was the cause of his ailment to being detected with cancer, to gradually recovering, was nothing less than a miracle for him and his family. Sandeep was determined to give back to the society and started working with social-sector organizations (health) from 2015 to 2020. He devoted himself to work for thousands of cancer patients, cancer-survivors, and their families, providing them guidance, emotional support, financial support for their diagnostics, treatment, care and education.

While his work created a positive impact on the lives of several patients, he realized that his ultimate calling was to go back to the grassroots and address the challenges from where they initiate – villages where there is lack of awareness of health issues and lack of access to healthcare infrastructure. Sandeep took a break from his job, and started conceiving an idea around how by leveraging technology, he can address the challenges he had earlier identified and make primary healthcare affordable and accessible in rural areas, where more than 65% of India’s 1.4 Billion population live. After numerous interviews with people living in these areas, discussions with senior administrators of India’s biggest hospitals, professors and government officials and evaluation of how other developing nations are handling the problem, Sandeep conceived the idea of DigiSwasthya (Digi=Digital, Swasthya = Health). He invested most of his savings till then to establish DigiSwasthya’s 1st telemedicine clinic in July 2020 in his home district, Sant-Kabir-Nagar.

By creating a full stack primary healthcare platform, from creating a safe and hygienic physical space for patients to come, hiring trained nursing staff, creating tie-ups with doctors from prominent city hospitals, onboarding a tele-medicine software and hardware, to getting prescriptions fulfilled from adjoining pharmacies, Sandeep created one of the state’s 1st hybrid medical consultation facility.

By creating a network of such standardized clinics across India, Sandeep and his motivated team is on a mission “to transform the country’s primary healthcare system and make healthcare services affordable and accessible for rural communities by leveraging technology”.